Required cookies are essential to let you move around the website and use its features, such as accessing secure areas, shopping baskets and online billing. These cookies allow our website to provide services at your request.

Functionality cookies are used to remember the choices you make, e.g. your user name, log in details and language preferences. They also remember any customisations you make to the website to give you enhanced, more personal features.

Targeting cookies collect information about your browsing habits to deliver adverts which are more relevant to you and your interests. They also measure the effectiveness of advertising campaigns.

This site uses cookies and related technologies for site operation, analytics and third party advertising purposes as described in our Privacy and Data Processing Policy. You may choose to consent to our use of these technologies, or further manage your preferences. To opt-out of sharing with third parties information related to these technologies, select "Manage Settings" or submit a Do Not Sell My Personal Information request.

Hyundai IONIQ 5 won big at the 2022 World Car Awards today, with the all-electric crossover named overall World Car of the Year, World Electric Vehicle of the Year and World Car Design of the Year.

IONIQ 5 was recognised by a jury of 102 automotive journalists from 33 countries around the world. The innovative battery electric vehicle (BEV), which has already won numerous international accolades, was considered alongside 27 competitor models launched in 2021, ultimately claiming victory over other finalists in all three categories in which it was nominated.

IONIQ 5 is the first model in Hyundai’s dedicated BEV lineup brand: IONIQ. It takes full advantage of a bespoke Electric-Global Modular Platform (E-GMP) architecture to offer 800-V, ultra-fast charging capabilities for a 10 to 80 percent charge in just 18 minutes and a highly spacious interior. The unique packaging needs of an EV mean the axles can be pushed right to the front and back of the car, providing much more space than a traditional vehicle. When equipped with two-wheel drive (2WD) and up to 77.4-kWh battery, its maximum driving range on a single charge will be around 470~480 km, according to the WLTP standard. Its features include Vehicle-to-Load (V2L) technology, advanced connectivity and driver assistance systems that offer the ultimate in-car experience. 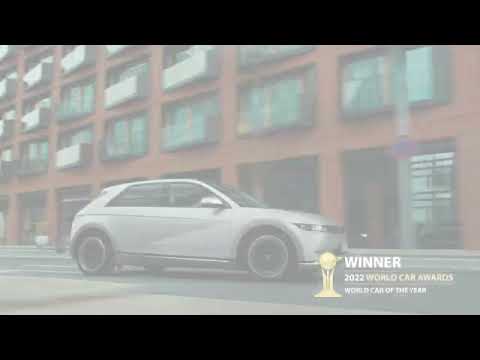 As Hyundai Motor transforms into a smart mobility solutions provider, the company is accelerating its electrification strategy to become the world’s leading EV maker. Hyundai plans to introduce 17 new BEV models by 2030, including Genesis luxury brand models, and aims to boost annual global BEV sales to 1.87 million units by 2030.

"IONIQ 5 represents a pivotal achievement for us as we pioneer a new generation of smart mobility solutions with our innovative E-GMP platform technologies, exceptional performance and disruptive approach to design and space. IONIQ 5 has made a strong impression on increasingly eco-conscious consumers around the world, and its success supports the acceleration of electrification of the automotive industry. The pace of change at Hyundai will continue unabated through the rest of 2022 as we will soon be adding to our award-winning IONIQ range."

IONIQ 5 heralds a new era in Hyundai design, defined by what the brand’s designers call ‘Parametric Dynamics’ with kinetic jewel-like surface details defining the BEV’s visual identity. The crossover’s unique exterior styling is characterized by clean, sharp lines that convey its dynamic presence on the road and distinctive ‘Parametric Pixel’ LED headlamps and rear lamps that leave a lasting impression.​

View All News
Company Info
Back to Top

We will provide you with information and explanations about the finance products that may be available to you. No recommendation will be made; you must make an informed choice whether the finance product is right for you. Finance is arranged subject to status and terms and conditions. We cannot guarantee that we will be able to secure finance for you.

You do not have to pay us for our services. However, a funder or broker we work with may pay us for introducing you to them. Different funders/brokers may pay us different amounts, but it will typically be based on a fixed percentage of the amount borrowed. This percentage may vary according to different factors, for example: the amount of credit; the age or type of vehicle; the type of finance product; or the funder’s assessment of the risk of lending.

For your reassurance, we are not able to change the interest rate you pay in order to receive more commission from a particular broker or funder. Although rates and commissions may vary between our finance partners, our aim is always to secure finance which is deemed appropriate by you to your circumstances.

For more information and to see our FAQ’s click here